An Opportunity to Visit and Understand the Jefferson Bible

At a recent secular humanist meeting I heard from Steve Lowe, he of the great DC Ingersoll tour, that Thomas Jefferson’s Bible, aka “The Life and Morals of Jesus of Nazareth,” is set to return to public display. It will be unveiled in an exhibition (November 11-May 28, 2012) at NMAH’s Albert H. Small Documents Gallery. In 2009 a preservation team led by Janice Stagnitto Ellis, paper conservator at the National Museum of American History (NMAH), discovered that the book’s binding was damaging its fragile pages. To save them she temporarily removed it and in March started a conservation treatment of the text to ensure its preservation. 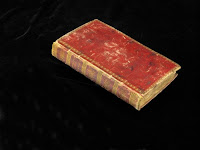 exhibition will tell the story of the Jefferson Bible and explain how it offers insights into Jefferson’s ever-enigmatic mind. Visitors will see the newly conserved volume, two of the New Testament volumes from which Jefferson cut passages and a copy of the 1904 edition of the Jefferson Bible requested by Congress. Visitors to the exhibit will also be able to view each page, as well as videos about the Bible’s meticulous conservation. Others may want to see a very small video snippet of Chris Hitchens citing the TJ Bible in a debate on Religion.

This is an event many of us will enjoy and indeed Steve in looking into arranging special docent tours for members of the WASH community.

Smithsonian Books will also release the first full-color facsimile of the Jefferson Bible on November 1, and the Smithsonian Channel will air a documentary, “Jefferson’s Secret Bible,” in February 2012. You can to purchase a copy of the facsimile.

I had heard a little about Jefferson’s cut-down and de-miricalized version on the Good Book, but the anticipated resurfacing has sparked a number of articles that updated my knowledge base in the topic. The Wikipedia and other sources have articles on the history, from which I learned the following.

When he was in his 70s, ex-President Thomas Jefferson had time to complete a project that had occupied to him some two decades. We know a little a bit about his early thoughts from an 1803 letter sent to Joseph Priestley, dissenting clergyman and natural philosopher, who believed that a proper understanding of the natural world would promote human progress.

In the letter Jefferson states that the idea of writing his own view of the "Christian System" grew out of a conversation with Dr. Benjamin Rush just before he became President, sometime around 1798–99. Jefferson had long been convinced that the original words of Jesus written into the New Testament had been contaminated over time to serve pressing needs. Early Christians, he reasoned were motivated to sell their religion. They needed to make it appealing to the any pagans” such as the Romans, Gauls etc. But in doing this they may have conflated the words of Jesus with the philosophy of the ancient Greeks and the teachings of Plato that were a basis for Roman and European thinking. These "Platonists" he believed had thoroughly muddled Jesus' original message. Jefferson assured his friend and rival, John Adams, that the authentic words of Jesus were still there and could be unmuddled. The task, as he put it to Adams, was one of “abstracting what is really his from the rubbish in which it is buried, easily distinguished by its luster from the dross of his biographers, and as separate from that as the diamond from the dung hill.” For more see: http://www.pbs.org/wgbh/pages/frontline/shows/religion/jesus/jefferson.html#ixzz1c72fDPcj and also the Jefferson Bible

For the 1803 project Jefferson proposed reviewing the morals of the ancient philosophers, and then moving on to what he called the "deism and ethics of the Jews. " From there he would conclude with what he called Jesus’ "principles of a pure deism. This would be the unmuddled message. We see a bit into Jefferson’s mind when he added a note on "omitting the question of his deity." With the project laid out Jefferson explains that he really doesn't have the time to do a proper job and urged Priestley to take on the task as the person best equipped to accomplish the task. But Priestley didn’t take up the task so Jefferson scaled back to a more limited goal. Around the time of his 2nd term in 1804 he finished "The Philosophy of Jesus of Nazareth". This was the predecessor to Life and Morals of Jesus of Nazareth. Alas no copies of this 46 page Octavo are known to exist.

What we do have is the later construction of a book he entitled The Life and Morals of Jesus of Nazareth. That is what the Smithsonian has a copy of and which is now known as the Jefferson Bible. In it moral lessons are drawn from the Gospels of Matthew, Luke, Mark and John. With his usual precision Jefferson cut verses from editions of the New Testament in English, French, Greek and Latin. He then pasted these onto loose blank pages, which were then to be bound into a book. In his 70s Jefferson apparently found this project fulfilling saying to a few friends that he read a bound version before retiring at night. But he realized that this was a project that might stir emotional responses in traditional religions, so he kept the work private.

Jefferson’s views on religion were private and complex. He was clearly reluctant to express them publicly and said to a friend:

“I not only write nothing on religion, but rarely permit myself to speak on it.”

For all of these reasons he kept the book a secret & only mentioned the book to a few friends. He never allowed it to be published during his lifetime. How did we find it?

Back in 1895, a Smithsonian librarian purchased the original Jefferson Bible, a collection of these clipped documents which now are assembled as the text, from Jefferson's great-granddaughter Carolina Randolph for $400. They were preserved and collated by Cyrus Adler. By 1904 we had assembled what we call the Jefferson bible. which was put on display in the United States National Museum. Congress was able to buy the rights to it. In the Progressive era of 1904 the Government Printing Office printed 9,000 copies for the Congress (3,000 for the Senate and 6,000 for the House). This began a nearly 50-year tradition of giving copies to new senators. This is perhaps not so popular a thing for Pols now, but the book remains in the public domain and you can access a copy in bookstores, museums and libraries. The Jefferson Bible is available through SmithsonianStore.com.

Gary, excellent comment. By the way, a beautiful edition of the Jefferson Bible was published by Beacon Press in 1989 ($16.00, 5x7 hardback). I recently sold my 1940 edition of it (perhaps the first commercial printing) to a friend in NY. -- Edd Doerr