2. The Missionary Position: Mother Teresa in Theory and Practice 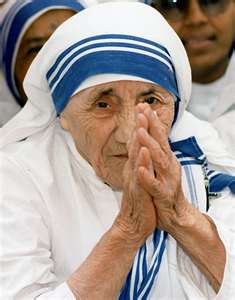 Do we need to worry if Mother Teresa is canonized by the Catholic Church? Since there is no god, there are no saints. And no miracles.

@Lucette You are correct that nothing is accomplished DIRECTLY by this Catholic action. However, we do have reason to point out the hypocracy, falsehoods and suffering that is caused by this idiot's actions. Those actions are used indirectly to clebrate and propagate the myths of the Catholic Church and ensnare others in pre-modern delusions.

It is good to have standards by which we judge what was real versus a fictional, impressionist version of history. That said it can be hard task since people don't agree on the facts and have to draw conclusions from them. I had a recent post on this and noted how George Washington was deified as not only a national hero, but as a religious one.

History is written by the winners...

Some winners of struggles write histories as messages of a certain kind that become powerful memes. Others aren't picked up and replicated or are drowned out by a noisy but powerful minority. The FDR group won many policy and electoral victories and helped win a war. Their message isn't the dominant one of the era since conservative forces could hang on and cloud the issues, radicalize over time and provide distractions of the type that we also see on issues like climate change.