Maryland Senate Bill 706, House Bill 1343, and House Bill 453 (Maryland Education Credit) propose providing a tax credit to reimburse individuals and businesses 60% of their donation to charities that finance private school scholarships for children and teenagers, capped at 15 million dollars in tax credits each year.  All of these bills only offer the tax credits for schools that charge no more per student than the public schools.  This cost restriction provision favors religious schools because religious institutions already have paid staff who can be teachers or administrators and whose salaries are already paid by members and because a quality secular education is costly to provide.  House Bill 1213 (BOOST) proposes a 70% tax credit to reimburse business donations for private school tuition.

Religious schools often have an institutional self-interest to try to convince children that they should accept the sponsoring organization's definition of deity.  They may actively teach children to distrust and fear secular academics or competing perspectives.  In pursuit of this self-interest some religious schools stridently teach children blatant falsehoods that contradict a large amount of modern knowledge.  Other religious schools more mildly teach subtle falsehoods that contradict a smaller amount of modern knowledge.  Either way, young children are impressionable, teenagers are responsive to peer pressure, and as a result they are vulnerable to carefully crafted indoctrination.  Private schools can mix political advocacy with religion with academics tightly together, there are no restrictions on what they can teach their students.  The result is harmful miseducation that can be difficult to undo.

Some private schools in Maryland (for example, Windsor Christian Academy and Calvary Christian Academy) teach a curriculum provided by publisher A Beka Book.  A Beka Book takes a biblical literalist and young earth creationist position in its science curriculum, portraying the Genesis creation narrative as a fact.  Some Maryland private schools are members of Accelerated Christian Education which promotes young earth creationism and declares solar fusion to be a myth invented by evolutionary scientists.  Some private schools in Maryland belong to the Association of Classical and Christian Schools that was founded by Douglas Wilson who advocates for exiling gays and executing adulterers. Many private schools in Maryland belong to the Association of Christian Schools International which endorses intelligent design creationism.  A student and her mother who testified before the House Ways and Means Committee for these bills were from Chapelgate Christian Academy which is a member of the Association of Christian Schools International.  These schools are prioritizing promoting their own religious world view over providing an unbiased, comprehensive, and factually accurate education to children.

A tax credit to reimburse donations that fund private school scholarships would offer no guarantee of better educational outcomes for Maryland’s children.  The finances of private schools can be opaque, making financial abuses difficult to detect.  Private schools do not have to report or administer teacher qualifications, class sizes, curriculum taught, student retention rates, graduation rates, demographics, or discipline or suspension policies.  The private schools eligible to benefit from the tax credits may legally discriminate against both students and staff on the basis of academic ability, gender, religion, sexual orientation, and disability.  Insofar as these bills provide any anti-discrimination protections, those protections apply only to admissions, not to ongoing fair treatment of the admitted students, and even those limited admissions protections lack an enforcement mechanism.  Non-theists need not apply is no doubt the admissions policy of some of the schools that would benefit from the government subsidized tuition.

If lawmakers want to reduce the cost of private education then they can provide additional funding to public schools to allow otherwise privately educated children to attend public school classes part time and/or to participate in public school sponsored extracurricular activities.  Each county can have their own law regarding the extent to which their state public school classes and facilities are available to children who are otherwise receiving a private education.  Additionally, private schools and home schooled children can be lent the same government purchased textbooks that are utilized by the secular public schools.  These approaches to assisting privately educated children avoid most of the problems that result from direct or indirect government funding of unaccountable private schools with ideological conflicts of interest.

Senate Bill 706 has passed in the Senate and is now being considered in the House.  If it passes in the House then it will be signed by Republican Governor Hogan. If you live in Maryland and oppose these "Maryland Education Credit" bills then send your representatives an email now, before the House floor vote.
Posted by Explicit Atheist at 19:41 No comments:

Our Religions: Are they the Religions of Humanity Itself? by By Daniel Quinn author of Ishmael 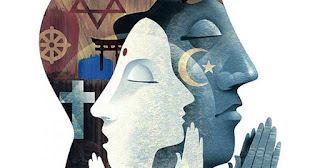 Author Dan Quinn takes the animist point of view as being our real roots in a reverent way of looking at the world. We humans belong in our places (wherever our early tribes were)  because they  are special niches which we call "sacred".

As a run up to Big Religions sweeping this early idea away Quinn provides and interesting interpretation of a range of stories from Genesis.

See http://www.filmsforaction.org/articles/our-religions-are-they-the-religions-of-humanity-itself/ for the full story which includes the fall from Innocence.

What knowledge tempted Man?  Was it the discovery of agriculture?
Quinn explores the conventional Cain and Abel story to find - "the elder, Cain, a tiller of the soil, and the younger, Abel, a herder. The improbability that two members of the same family would embrace antithetical lifestyles should tip us off to the fact that these were not individuals but emblematic figures, just as Adam was (Adam merely being the Hebrew word for Man).
If we understand these as emblematic figures, then the story begins to make sense. The firstborn of agriculture was indeed the tiller of the soil, as Cain was said to be the firstborn of Adam. This is an undoubted historical fact. The domestication of plants is a process that begins the day you plant your first seed, but the domestication of animals takes generations. So the herder Abel was indeed the second-born--by centuries, if not millennia....Another piece of background that needs to be understood is that in very ancient times farmers and herders had radically different lifestyles. Farmers were by the very nature of their work settled villagers; but herders (by the very nature of their work) were nomads, just as many present-day herding peoples are. The herding lifestyle was in fact closer to the hunting-gathering lifestyle than it was to the farming lifestyle.As the farming peoples of the north expanded, it was inevitable that they would confront their Semitic herding neighbors to the south, perhaps below what is now Iraq--with the predictable result. As they have done from the beginning to the present moment, the tillers of the soil needed more land to put to the plow, and as they've done from the beginning to the present moment, they took it.As the Semites saw it (and it is of course their version of the story that we have), the tiller of the soil Cain was watering his fields with the blood of Abel the herder."

As we know farmers need land and so the conquest is on and tribal mores are swept aside.

Posted by Gary Berg-Cross at 10:41 No comments: