Sensational claims have been taken to task here in the Secular Perspectives blog. Luis Granados took on The supposedly scientific Prayer Study proving the existence of God and Robert of rwahrens just had to rant about:

“another of those idiotic news items where they take a common every day item and claim that the government has paid an exorbitant price for it. This one is for muffins. Muffins they claim the government paid $16 for.”

Both blogs expose an instance of a sensationalized claim, seemingly but not really grounded in facts, which advances some popular bias and lingering hope. Wouldn’t it be great if Science could prove that God exists and that we can get what we pray for - or at least what we good people pray for to the right god and not what those fanatics are praying for. Luis shows some of the fraud behind the claim for prayer. The news report that Robert took on week about alleged spending $16 a piece for breakfast muffins and $8 for a cup of coffee for employees attending a conference in Washington two years ag

o was quickly countered by avalanche of criticism that pointed out it was a half baked report. Only later did papers like the Washington Post report, that the price included not just a muffin, but a continental breakfast of baked goods, fresh fruit, coffee, tea, soft drinks, tax tips as part of the use of the conference space.

Media is prone to over-hyped and controversial news pieces because of the pressing need to increase viewership/readership. On the other hand it may not cover protests such as Wall Street is being occupied against corporate greed. There is a good argument that it did not get adequate coverage till there was a sensationalized violence- see Op-Ed: Wall Street is Occupied protest not getting media coverage

Sensationalism sells and may 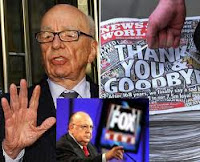 include reporting about generally insignificant matters and events such as $16 muffins appeal to the emotions are proxies for important arguments such as whether government is too big and wasting money. Equivalent dog whistle stories such as corporate wooing of pols by overpaying for Redskin booths and services may not be given equal treatment.

Consider the quick response to the grand muffin claim after The Washington Post, among other media outlets, pronounced word of the offense in a front page story, based on a Justice Department auditor's report. Senior Republican Senator Chuck Grassley who is on the Senate Judiciary Committee (which has oversight of the Justice Department), said the report was a blueprint for the first cuts that should be made by the "super committee" searching for at least $1.2 trillion in savings. Later NBC's Brian Williams featured the Justice Department's offense in that day evening's news lineup. As rwahrens feared an ill-informed link was made to sensationalized examples of wasteful government spending such as the Lockheed bill for $640 for custom molded toilet seat covers.

“Regardless, to put the blame totally on government employees, as the auditors and then the media so quickly did, and not at least in part on what and how hotels routinely charge for conferences services, is another example of how easy it has become in America to demonize the federal workforce--a group of dedicated public servants who in reality are working tirelessly to protect our country, provide services to the needy and tackle problems that are bigger than any one of us can solve alone. “

More examples of loud stories include misleading statements, omitting key facts and information and half truths as discussed in my Flexible Thinking in a Time of Imprecise Statements.

Advocates can get away with this because we live in a time of head spinning news overload. In our news cycle one story steps on the previous so rapildy that we don’t have to reflective on the core information that often is no more than half truth and innuendo. See my Stressed Buffet Offered by the Hurricane, News Quake for more on this phenomena.

Some important items seem to have been left off the 15 point list:

1. Reproductive choice: This year has seen an unprecedented level of legislative attacks on abortion rights and access to contraceptive services. Women's rights pf conscience need to be on the list.

2. This year has seen an unprecedented level of attacks on public education: massive cuts in public school funding and a step up in diversion of public funds to discriminatory church-related private schools.

These two issues both relate to the principle of separation of church and state that is supporter both by Humanists and a very large segment of the non-fundamentalist religious community.

I think that Edd meant to post this comment under the Occupy NY and DC blog post at http://secularhumanist.blogspot.com/2011/10/occupying-dc-and-wall-street-in.html which has 15 issue areas. Education is one of the issues, but they didn't break it down to the level of the current attack on public education.