Do They Contradict Themselves? 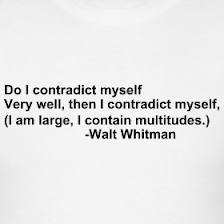 They say that “Mother Nature Never Shaved with Occam’s Razor.” And it is not just physical reality that is complicated.  Humans and their positions are too. Mayor Koch, who died Feb. 1 at 88 of congestive heart failure, was many things and some of them complex, puzzling and perhaps paradoxical.

Early a crusader against Communism and the Vietnam War, he was elected as a Democrat but  later campaigned for George W. Bush. He opposed unions (denouncing transport union sympathizers as “wackos,”) although they helped rescue the city when the teachers' union furnished $150 million from their pension fund to buy Municipal Assistance Corporation bonds. He self described himself as a sane libreral but  became more hawkish over time and berated Obama for timidity in attacking Iran or confronting the Muslim world – “"President Obama is showing weakness to the Muslim world." Ed Koch Reverses Position, Slams Obama's "Weakness" on Muslims

Koch was a known for outrageous, antagonizing and unapologetic pronouncement such as reported by Joseph Berger in the New York Times," needlessly by saying Jews would be "crazy" to vote for Jesse Jackson for president because Jackson could be (like Koch himself)  outspoken, to many people’s annoyance and use outrageous language such as slurring NYC as "Hymietown".

Still I was a bit knocked back to hear a recent Koch clip from the Piers Morgan show where he mused about his secular-religious views this way:


"I'm secular but I believe in God. I believe in the hereafter," he said. "I believe in reward and punishment. And I expect to be rewarded. God gave me a very good hand to play over my 88 years. I have no regrets."

OK, so maybe this is another politician having it both ways and wanting to be loved by both sides. To be fair maybe he is talking about secular government and religion and bounding his secular to what is Caesars' and his religion to what is God's.  It would be nice to draw out such politicians so we know what type of values they have and what type of government we can expect and who they might heed on what issue.


Or it is easy to say that a Mayor Koch was a one-man anomaly: a self-declared secular Jew who harbored a strong belief in God, but he is not alone.  As I noted in “All Mixed Up: Perplexing Hyphenated Identity, 50-50 Concepts and Mixed up Ethnicity,” American has not only an ethnic hyphenated label phenomena like Irish-American, but one that mixes religion and ethnic identity such as the self-label Atheist Jew. Does it make sense to say that one is an atheist Catholic? It doesn’t seem like it. I can be an atheist who is a White, English person, but atheist and Catholic are both in what seems the “religion” dimension with no overlap on the Venn diagram. It can seem confusing since terms for Jewishness and Catholicism seem like religious identity, but they also have ethnic-historical identity too. This can be accepted as part of human complexity and people labeling things on their own terms, but it can make understanding what people, such as declared “secularists” stand for.  In what we variously call the Near or Middle East there is much labeling of secular government, Turkey and Israel come to mind, they are very religious nations too. And what claims to be a secular government can drift over to religious pressures such as the rising influence of ultra-orthodox  in Israel.

For more confusion and having it your own way like Mr. Koch see Can a secular humanist believe in a god?


I guess some people can think this way, but it seems like they are floating in some see of definitional relativism that relies on the rest of us to tolerate their having it their way. Still I have some concerns that having it both ways without a better understanding leads to situations such as we have on the debt, deficit & economy.  Conservatives agitate for a cut in government spending to handle the "debt problem."  But this hurts the economy and so they can complain about slow job recovery.  If you stimulate job growth with spending they can complain it increases the debt.  It's one equation with 2 unknowns and a guaranteed complaint. Sometimes this hyphenated view of cultural identity (secular) or religious identity seems like that type of variable equation that can flip back an forth as needed.  The result may be confusion..at least in the hands of people not trying to understand or pursue a clear definition of secular in a world of religious cultures.

Or perhaps they are more in the spirit of Walt Whitman in his Song for Myself: