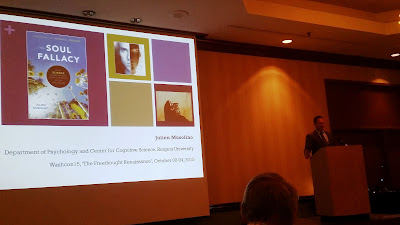 
Dr. Julien Musolino,  a Franco-American cognitive scientist, was one of the speakers at the recent WASHCON15. These are some notes (and pictures) from his talk.
Julien is an author, and associate professor at Rutgers University, New Brunswick, where he holds a dual appointment in the Psychology Department and the Center for Cognitive Science.  Born and raised in France, Julien studied at the University of Geneva, in neighboring Switzerland, the University of North Wales, Bangor, in the United Kingdom, the University of Maryland, and the University of Pennsylvania.
His research has been funded by the National Institutes of Health and the National Science Foundation and some of this is captured in his recent book:
•The Soul Fallacy: Applied Sentience Interview with Rutgers Professor Julien Musolino
•https://www.youtube.com/watch?v=39in90DPj_0 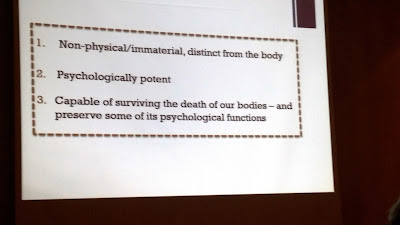 Dualism is obviously an old belief and deeply embedded in old philosophies and common sense language.   It's a perennial topic but not often critically addressed. (But see Lives Without Selves: Owen Flanagan
https://www.youtube.com/watch?v=POXTdHTKTL0 for some philosophical discussion on the nature of person.)
But combining Self, aka Soul, as distinct from the body but interacting with it raises lots of questions, at least from a scientific point of view.  For example, there’s the problem of how something “immaterial” could interact with matter to produce results (the “psychological potency”idea that the soul influences how we act.).

We can ask Why isn’t belief in various gods, considered delusional? We do have some diagnostic categories for these types of things and what have been described as "visions" may just be hallucinations.  Professionals may think about this, but it is atouchy subject with the layman and invested religious professionals.  "Was Moses hallucinating?" is not a good topic in a temple, church or mosque. 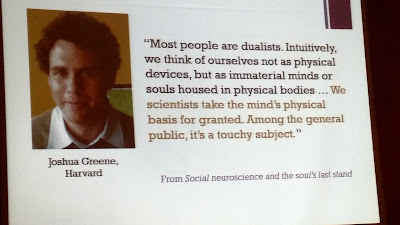 As Mark Baker and Stewart Goetz observe in their book “The Soul Hypothesis,” “Most people, at most times, in most places, at most ages have believed that human beings have some kind of soul.” And the National Pew surveys suggest that belief in immortality is about 70%
It is clear that this hypothesis or "intuition" also plays a central role in most religious doctrines.  after all Pope John Paul II famously articulated the idea in a message delivered to the Pontifical Academy of Sciences in October 1996, in which the Holy Father declared that the human body might originate from preexisting living matter, but the spiritual soul is a direct creation of God.

Further, explaining the mind as a product of evolution, claimed the pope, was incompatible with the truth about man.
But Julien argues that the soul is a scientific claim in that it is an existence and influence claims.
“Belief in an immaterial, psychologically potent, and detachable soul that can function apart from the body after we die amounts to a series of claims about physics, biology and the sciences of the mind,”
This claim that can be investigated using the tools and methods of rational inquiry and science gives us every reason to believe that humans don’t have souls. It's one of those soul-in-the-gaps problems where things previously attributed to soul turn out to be explainable by brain science, Physics and the like.

As time permits we will provide updated information on Reason Rally 2016 planned for June, 4, 2016 as provided us by Sarah Morehead at the conference. Snapshots also from talks by Andy Thomson (Happiness in a Secular World), Ron Lindsay (The Necessity of Secularism) Jason Heap, Justus Cade (Are SAtheists hurting Humanism) and more.
See http://www.meetup.com/humanism-218/events/225993201/ for more details.


Found this (Bible) in my hotel. Returned it to the front desk. Next time I'll request a non-smoking and non-religious room.
Posted by Gary Berg-Cross at 19:46